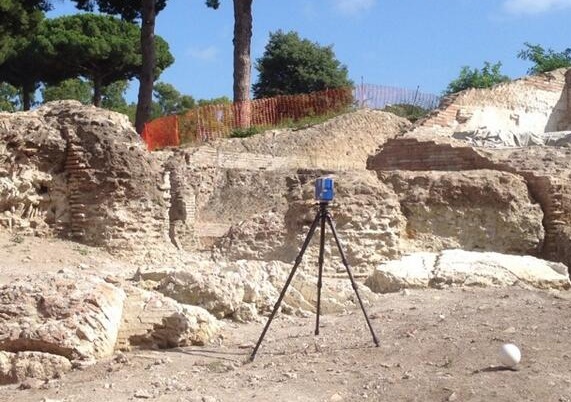 Last night in the USA a program called Ancient Impossible: Extreme Engineering aired on the History channel. The series focusses on how today’s technological achievements were developed centuries ago. This episode looks at specific examples of ancient structures and how past civilisations were able to to create new engineering feats to counter the obstacles that stood in their way.

Part of this Extreme Engineering programme included the work carried out by The Portus Project and their work on the ancient port of Rome. Included within this section was the laser scan work competed by Archaeovision member James Miles (examples of which can be seen below). The digital documentation of the site has enabled archaeologists to further understand the complex building work found at Portus and the show highlights how important the current technological advancements in archaeology are in understanding and documenting the past. Laser scanning is used in the Portus project as a way to fully record the extant building work, allowing us to manipulate the dataset into any view that we wish and is used in conjunction with photogrammetry, gigapixel imaging and building surveying to name but a few. The combination of these different technologies allows the team to gain a more detailed understanding which in turn allows Grant Cox from Artas Media (who we work closely with) to accurately model the site. James with the laser scan data at Portus

Although this program is only currently available in the USA, it will air later this year in the UK and be shown across the world in various countries. We believe that the UK version will air in December but as of yet we are unable to confirm this.

There is much more to the Portus project than just the technological side and I would urge people to visit the project’s website to learn more about the work that is completed. The Portus MOOC has provided an excellent insight into this work and this will again run in January 2015 through the new Future learn course.