Step by Step: RTI at St Michaels and All Angels Church, Lyndhurst 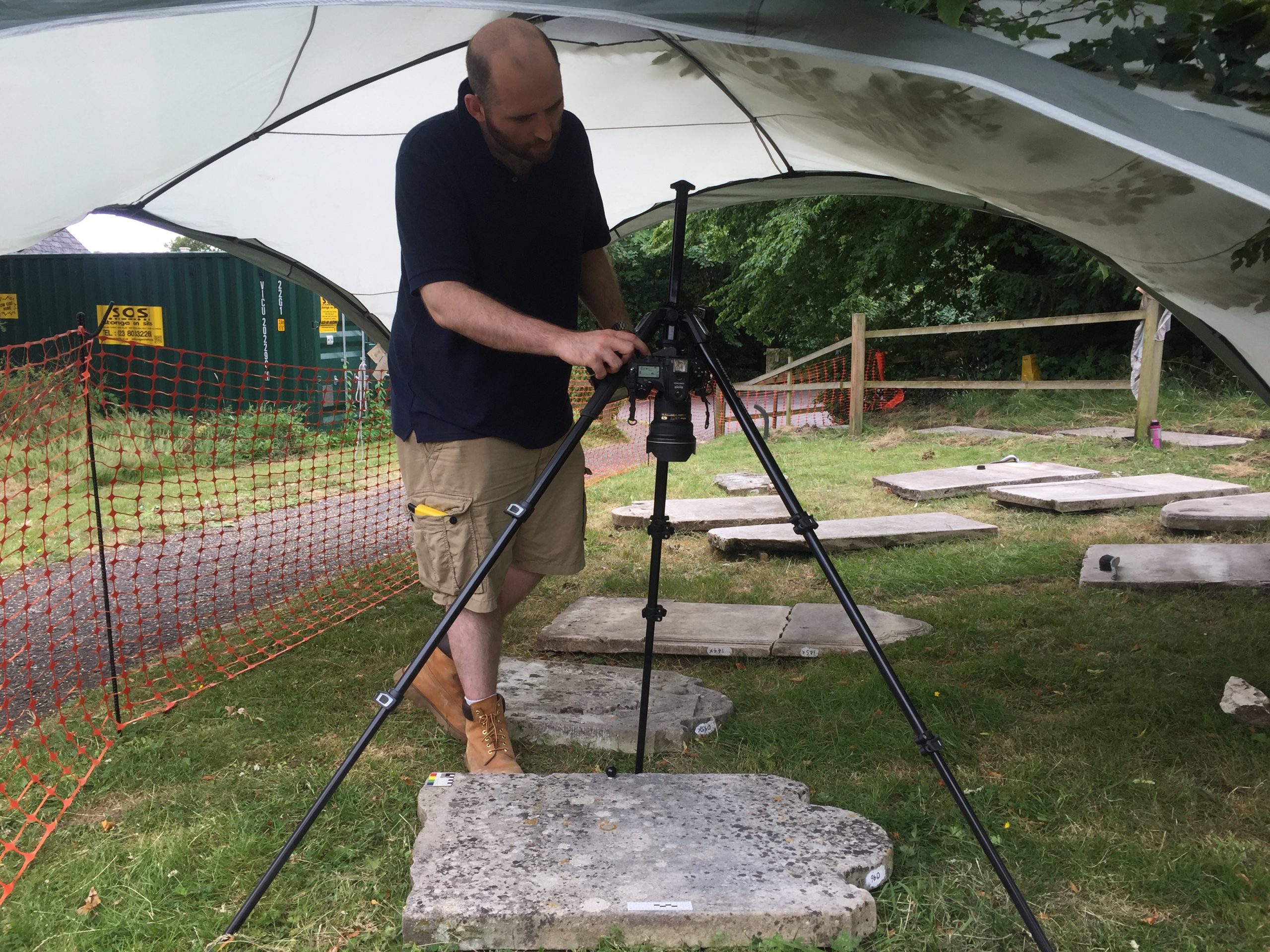 In July 2019 Archaeovision successfully completed a programme of Reflectance Transformation Imaging (RTI) recording at St Michaels and All Angels Church in Lyndhurst, in the New Forest, England. Commissioned by the New Forest National Park Authority, funded by the New Forest LEADER local action group through the European Agricultural Fund for Rural Development, and approved by the Winchester Diocese and Winchester Planning Authority, the recording project comprised the careful moving, cleaning, and detailed photographic recording and image processing of 80 headstones in St Michaels and All Angels churchyard.

The St Michaels and All Angels Anglican church overlooks Lyndhurst and was built in 1870 in the gothic style, with a spire than can be seen from the Isle of Wight. It serves the parishes of Lyndhurst, Minstead, and Emery Down. The church is the third built on the site, replacing the second built in 1741, which in turn replaced the first built in 1285. It has a closed burial ground which was filled by 1885. It is best known as the location of Alice Hargreaves’ (née Liddell) memorial, the inspiration for Alice in Wonderland. There are also 3 monuments in the churchyard which are Listed Buildings.

In 2019 St Michaels and All Angels churchyard underwent a conservation programme in which 43 headstones previously used to line a path through the churchyard were moved for path maintenance, and a further 37 buried headstones were recovered from a ditch running alongside the path. Some of these were repurposed to be used as benches in the churchyard. The headstones recorded ranged in date from 1728 to 1938.

As the purpose of the project was to provide high resolution datasets of the headstones to improve the readability of the inscriptions, highlight RTI was selected as the most appropriate recording method. RTI is a photographic recording technique that has been used across archaeology, from recording rock art to graffiti to coins. RTI creates images by “raking” artificial lights and shadows over an object to capture the subtle differences in the object’s surface details. These images are then processed to create photorealistic 3D images which can be manipulated virtually to view differing light effects on the object. Highlight RTI is a method of recording RTI outdoors using a reflective ball and additional artificial light source, to problem solve the effects of sunlight.

The RTI images produced by Archaeovision can now be used to allow researchers to make out weather-worn inscriptions and motifs on gravestones, which would otherwise be invisible to the naked eye. This information can now be used to update burial registers and genealogies, allowing for more detailed tracing of family histories and informing local historical research particularly as the parish records are heavily degraded. Details of the recordings can be accessed in the project report, and the photographs and transcriptions can be found on the New Forest Knowledge website. The new locations of the headstones have also been recorded by the New Forest District Council for visitors seeking to access specific headstones.

Below is an example of the earliest headstone that was recorded within the project. It highlights the suitability that RTI provides to recording weathered headstones, as on site, no inscription was visible.

Kate has recently completed her PhD in Archaeology at University of Southampton. where she combined documentary filmmaking with archaeological research and practice. Prior to this, she completed a Masters of Film and Television specialising in documentary filmmaking at the Victorian College of the Arts, Melbourne University. With Archaeovision, Kate will begin to use her experience in film and documentary by exploring new avenues of work for the company, where we will be look to partner with a number of production companies. At the same time, Kate will also be used in a number of our ongoing projects, where she will develop her skills in 3D recording and processing.