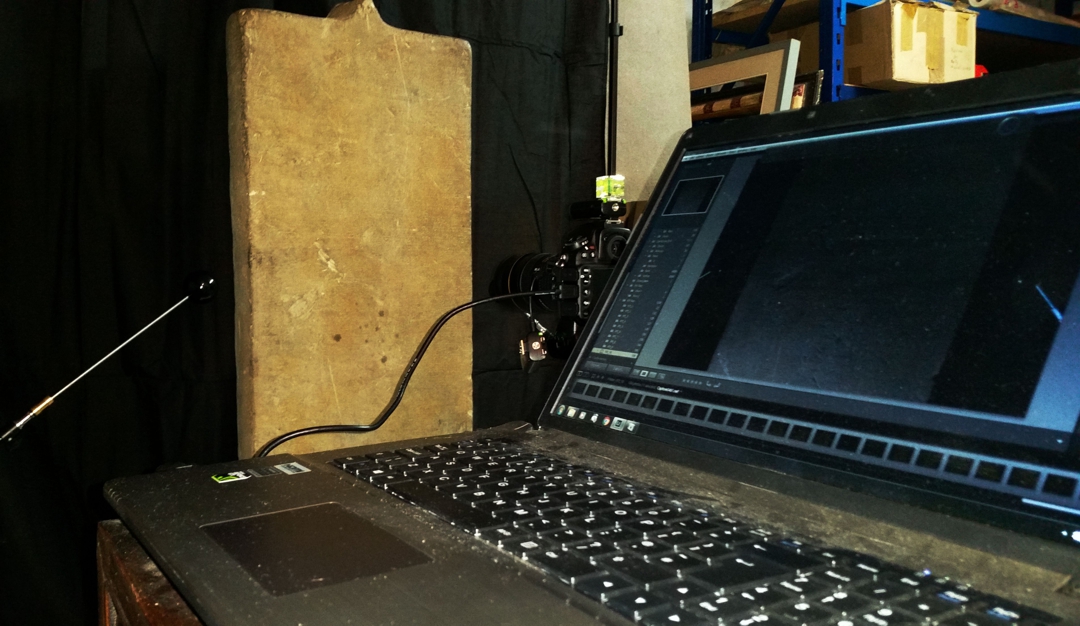 As part of our ongoing collaboration with the École française d’Extrême-Orient (EFEO), which is a French institute dedicated to the study of Asian societies, Archaeovision were employed to capture an important 12th century Cambodian stela through RTI.

The stela is an important piece of Cambodian history as it shows the only known example of the inscription work completed by the scribe but there remains some areas within the inscriptions that are hard to identify and translate. The stela is privately owned by a Cambodian art collector in Paris due to the issues surrounding the UNESCO 1970 Convention on the Means of Prohibiting and Preventing the Illicit Import, Export and Transfer of Ownership of Cultural Property. The Louvre or any other museum are therefore unable to take ownership of this important artefact and the recording of this important artefact was essential within the work that EFEO complete.

The stela measures 110cm by 44cm and has a depth of 13cm. It contains inscriptions on both the obverse and reverse. Its size makes it hard to capture using traditional methods and past recording methods of stone rubbing and general photography have been taken. These have been able to highlight partial information but important sections were incomprehensible. Archaeovision were used due to our extensive background in the recording of inscriptions through our similar work on cuneiform tablets, such as the RTISAD project and our work with Jacob Dahl on the Recording of Assyrian reliefs and cuneiform tablets. RTI was therefore used to bring out the subtle surfaces differences and help within the overall understanding of the writing.

In total twelve RTIs were captured using a Nikon D810 camera which offers a 36mpx resolution. This provided not only the highest quality photographic record of the stela so far but enabled precise information to be gathered from the work completed. The twelve RTIs include two overall RTI captures of the surface detail, with ten subdivided sections that will be used to add to the overall captures completed. This data will be used by the EFEO to analyse the inscriptions and will be used in conjunction with the other data that they have. The work completed by Archaeovision is one part of an overall project looking into Asian based inscriptions and we look forward to work closing with the EFEO with further work based in India, Burma and Cambodia.

Multispectral imaging at the Estonian History Museum
Presentation in seminar