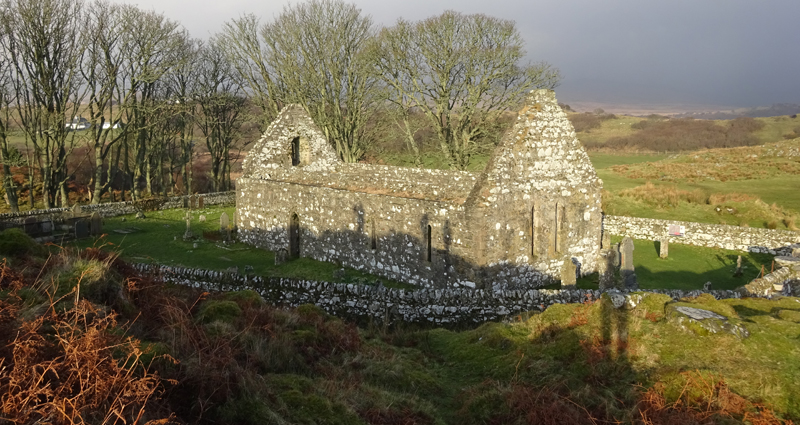 In February of this year, Archaeovision were hired by Islay Heritage, under the guidance of Professor Steven Mithen, the Deputy Vice Chancellor of Reading University, to create an interactive virtual reconstruction of Kildalton Chapel based on its original form. The work incorporated laser scanning, geophysics, aerial drone photography, photogrammetry, 3D modelling and webGL conversion.

Kildalton Chapel is of an oblong shape measuring 17.3 metres from east to west by 5.7 metres within walls that are 0.9 metres in length. The church served the medieval parish of Kildalton, which was an independent parsonage in the patronage of the Bishops of the Isles, and although the earliest documentary record dates from 1425, the architectural characteristics of the building indicate that it was erected in the late 12th or early 13th century. The building as it currently stands has been heavily restored, although some interior features including the remains of the piscina and aumbry are still seen. The building remained in use until the end of the 17th century, when services were transferred to a site at Lagavulin.

The recording at Kildalton was broken down into several stages. The first survey was conducted by Topcon and involved the laser scan recording of Kildalton Chapel. This survey focused on the building remains and very little of the surrounding area was captured. Although the scan data provides an overview of the building, the resolution and quality could be increased in the future by adapting the recording methodology and utilising another scanning system. The laser scan model could have provided a richer dataset to work: the point spacing of the model has been reduced from the original to save on data size and the survey focussed on the building work, rather than the surrounding landscape. For the purposes of the reconstruction, a greater emphasis of the surrounding areas was required.

To complete the survey for the purposes of the reconstruction, and to provide a context of the landscape and building, an aerial drone survey completed by Dr Kieran Baxter.The aerial survey was completed using a DJI Inspire Zenmuse X5 PRO and 1831 aerial images were captured. These were captured in their RAW format and processed as JPEG images. In addition to the aerial photographs, 4157 ground-based photos were also captured. The aerial images provide an overview of the landscape but are limited in their perspective to accurately model the building and the features contained. The capturing of the ground-based images allow this detail to be included and add to the overall functionality of the images for use within our 3D reconstruction. In total 5988 images were utilised in the production of the photogrammetry model of the site. The model that was created provides a replica of the site as it is today. This is not only useful for reconstruction purposes but allows for future analysis and comparisons. For online viewing, the photogrammetry model was created in twelve stages, with the final version containing 6.5 million polygons. This modelling process began with the creation of an overall model of the building and the surrounding landscape. Each additional production stage added greater resolution models of particular areas, such as the eighth century Kildalton cross. This process of focussing on specific parts, allows for a greater web interaction, allowing users to interact with the model, and still see the important features in as high a resolution as possible, whilst reducing the amount of bandwidth and computer power needed. 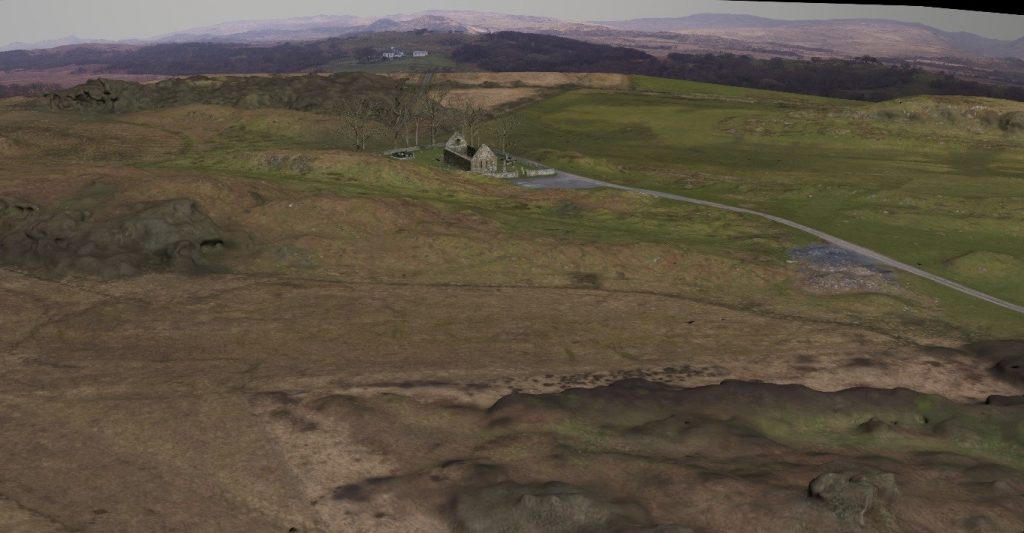 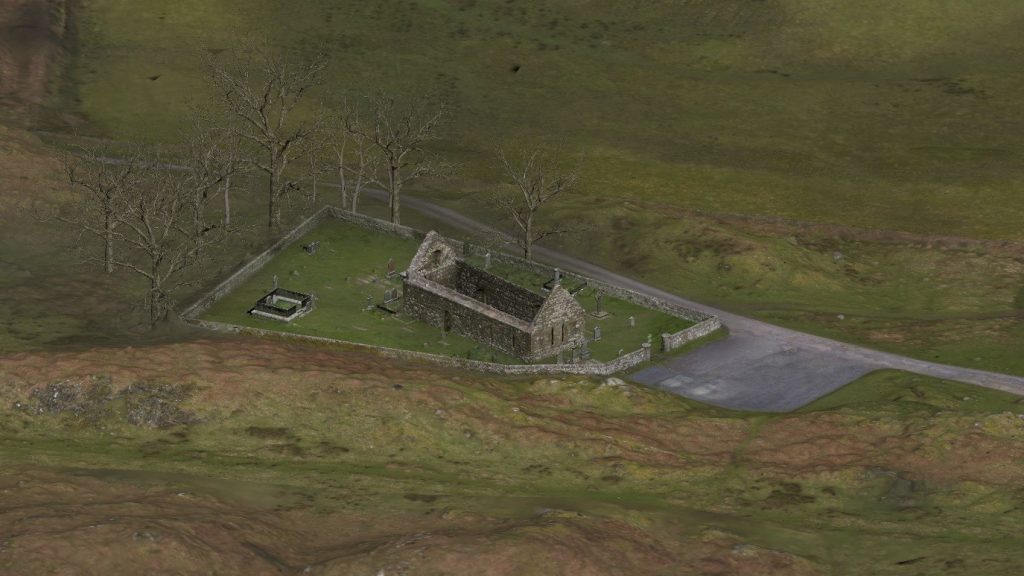 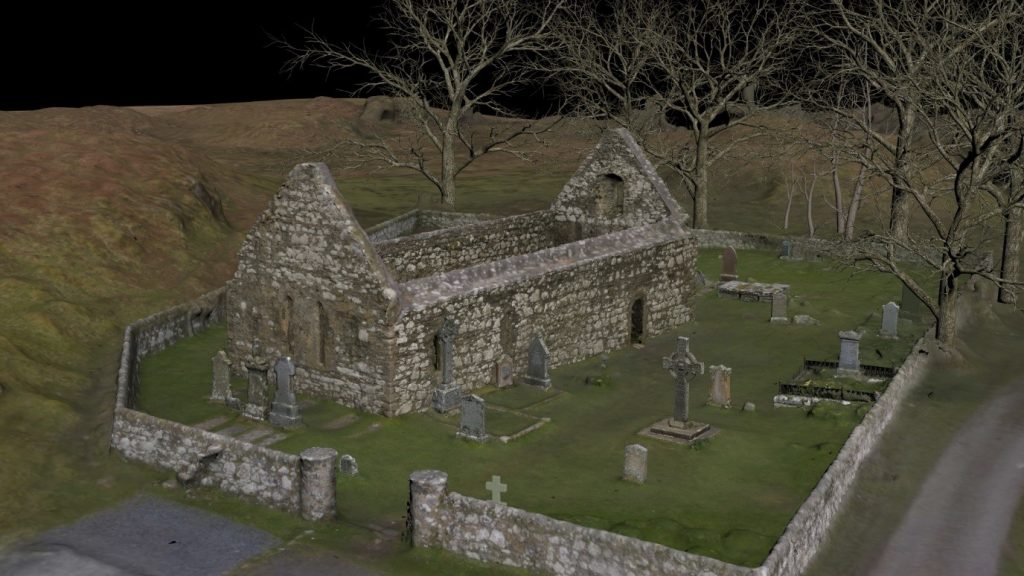 The photogrammetry model was created in Agisoft Photoscan, and as each aerial image contained a GPS coordinate, the model produced has been automatically scaled to the correct size and geographic position. The original tress of the landscape have been removed and replaced with 3D model assets. Trees move during the capture process due to wind and in order to correctly model these, movement within the images must be minimal. Rather than introduce an error in the alignment process, these were removed and the focus of alignment concentrated on the building and landscape only.

The 3D reconstruction of the chapel is based on its earliest form and resembles how it would have appeared during the 13th and 14th centuries, and was built in collaboration with Dr Alice Watterson. The model was completed through documentary research by Dr James Miles (Archaeovision) and through the advice of Professor Richard Fawcett, an Emeritus Professor from the University of St Andrews. The model follows our own interpretations: variations on its form and style are still possible, given the decay found within the building work and the unknowns surrounding the internal design.

The reconstructed chapel was modelled using the photogrammetry model produced, as well as the laser scan data that was recorded by Topcon, as a guide to establish the footprint of the structure, its height and positioning of the windows and doors. The height of the laser scan and photogrammetry model in comparison to the reconstructed model differs slightly due to the subsidence and decay of the building, as well as the development of the surface of the surrounding landscape within the church walls.

Much of the reconstruction is based on the extensive knowledge of Professor Richard Fawcett and we have utilised his experience in developing the chapel, as well our own experience of working with historic churches. Three reconstructions were created, the current decayed form; the original exterior of the chapel; and the original interior of the chapel. These are now available online through an interactive viewer.

Originally, a local settlement would have surrounded the chapel, but rather than falsify an incorrect representation of the unknowns, these additional supplementary houses belonging to the local parishioners have been excluded from the overall model. Included in the reconstructed medieval landscape however is the priest’s residence, which would have been in the form a turf-roofed cottage, with ancillary accommodation for his horse and a barn for the storage of the tithes. This has been placed on the rise to the west of the chapel where a geophysical survey had indicated evidence for a possible structure.

As the models were intended for online interaction, the reconstructions have been designed with this in mind and are not photo-realistic, as this would have increased the file sizes and subsequent loading of the models. 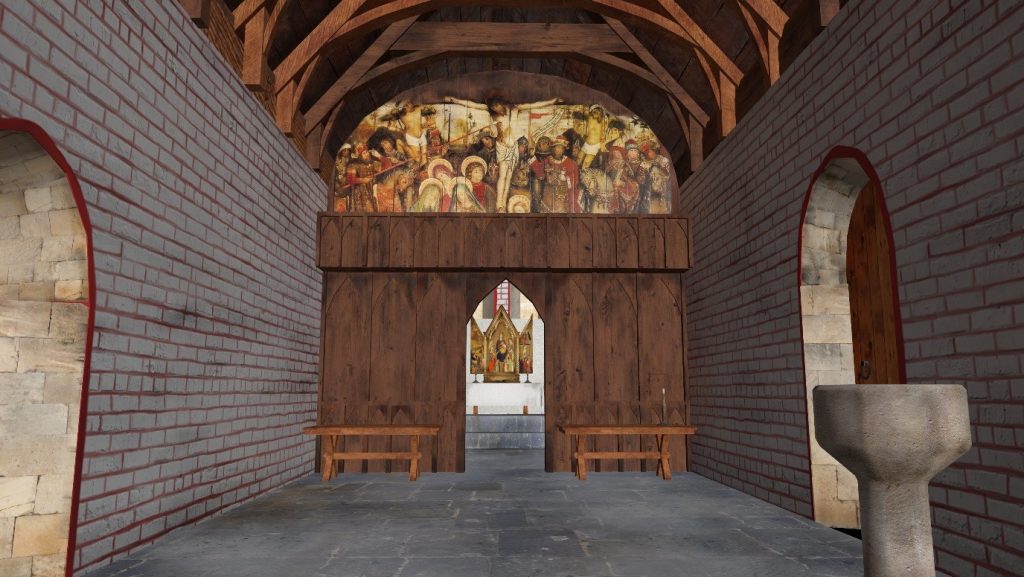 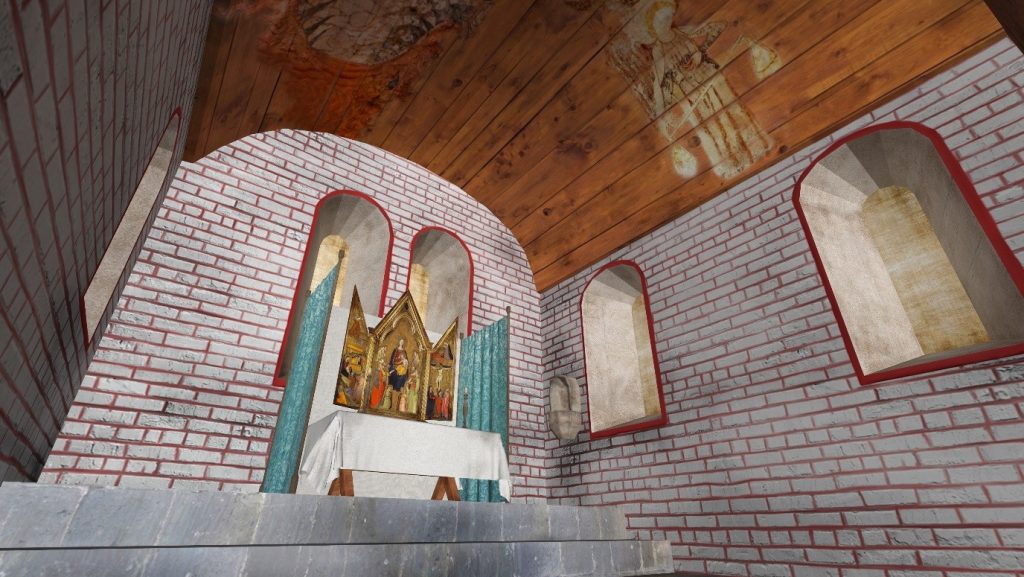 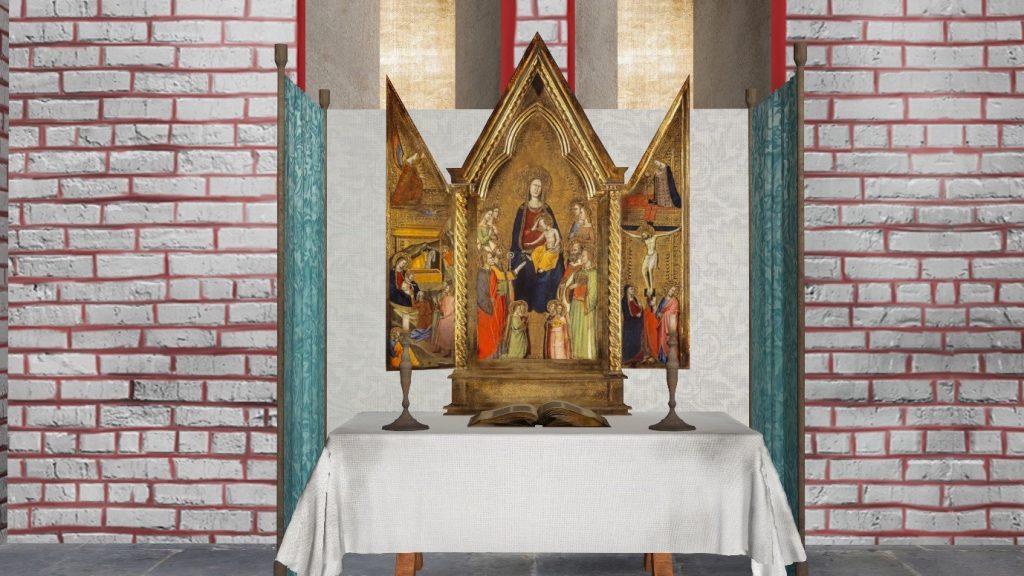 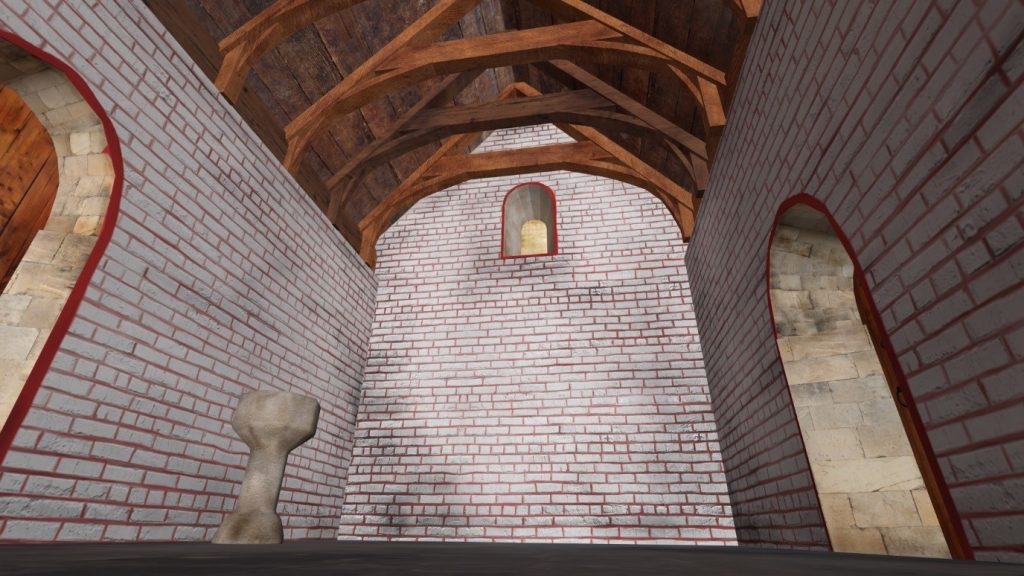 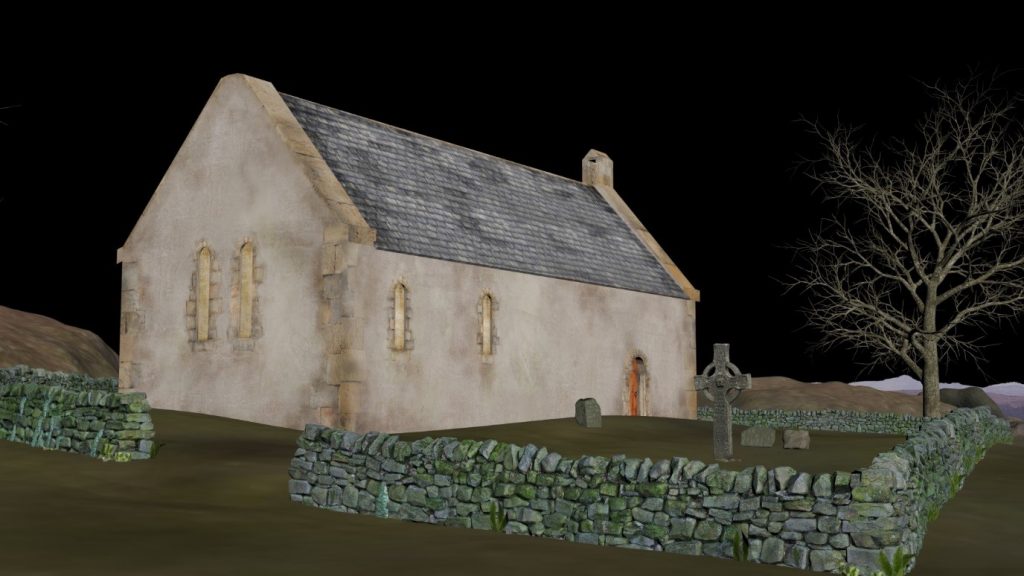 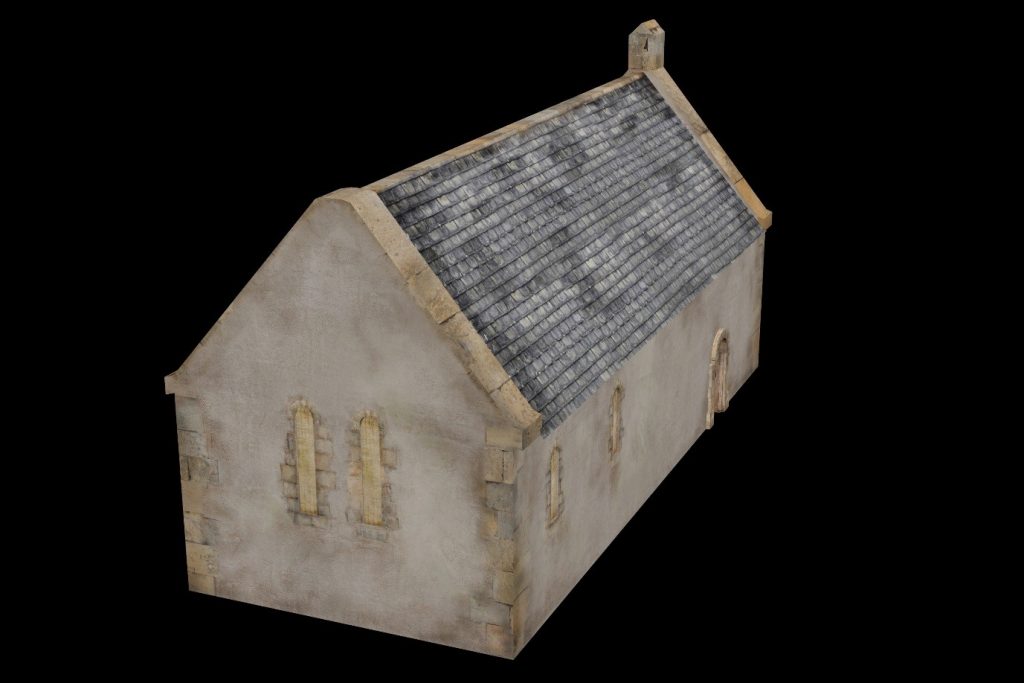 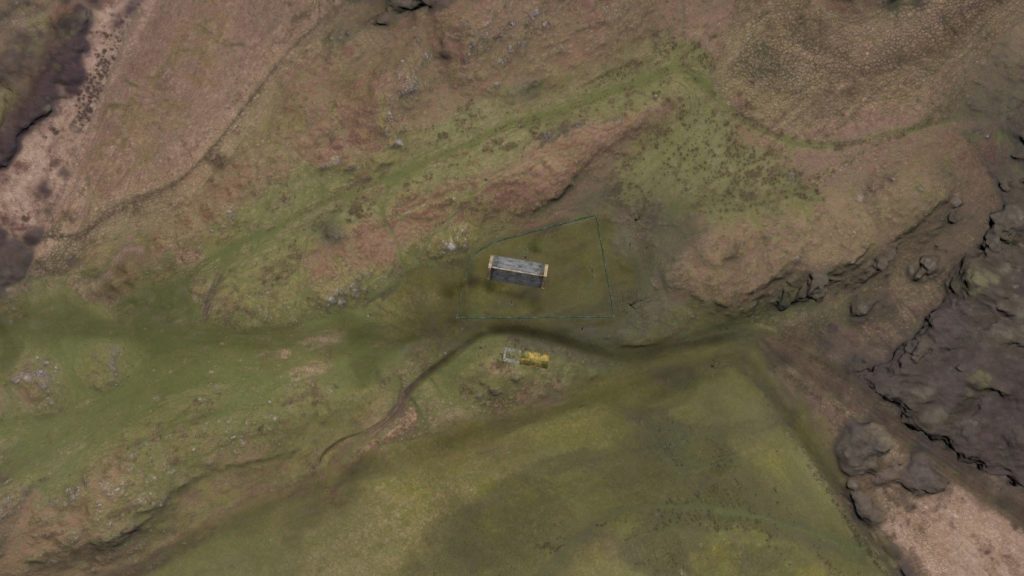 With three different models, and to enable a greater interaction of the reconstructions, webGL technology was used through Unity to provide a fully accessible and interactive model. Rather than limit a user’s experience, a first-person viewpoint has been adopted, enabling users to fully move around the reconstructed models.

Often within reconstructions, no explanations are given as to why parts have been modelled in the way that have. To remove this issue, and to provide context for how the models were created, a series of hotspot locations were included to enable users to understand the reasons behind the modelling. Unity was used as a basis for the interactive viewer due to the software development that the company provides. To enable the reconstructed models to be viewable online, each model was adapted from their original form to enable a more efficient load of the data. Gravity and environmental conditions have been added to the viewer and the model is now available for public interaction.